We’re using Zapier with Stardog. Now you can, too.

At Stardog we use a number of third-party applications to make our lives a little easier. One problem we discovered, however, is that these applications often won’t talk to one another, and in some cases they don’t expose an API so that we can easily get them into our workflows without manual intervention. We came across Zapier, and have found it to be quite helpful with automating our workflows, and we decided that our users might want to get Stardog integrated into theirs!

Zapier is a web application that allows users (both technical and non-technical) to create pipelines/workflows for their data to flow between hundreds of applications. These pipelines are referred to as “Zaps,” and they are made up of two different flavors of integration:

The Stardog integration into Zapier includes several of both of these. Let’s dive into the details.

With triggers, your Zap will poll Stardog and kick off a run whenever a specific condition has been met. As of the initial implementation, we support the following triggers:

Data doesn’t just flow from Stardog in Zapier. You can also take data provided by any of the above triggers, triggers from any other supported app, or intermediate results of actions earlier in the pipeline. As of the initial implementation, we support the following actions:

The first example use case is a simple Zap that monitors a Gmail inbox for emails with attachments that match specific criteria and automagically loads them into a Stardog BITES store for storage, metadata, NLP, etc. First, we set up the Gmail trigger: 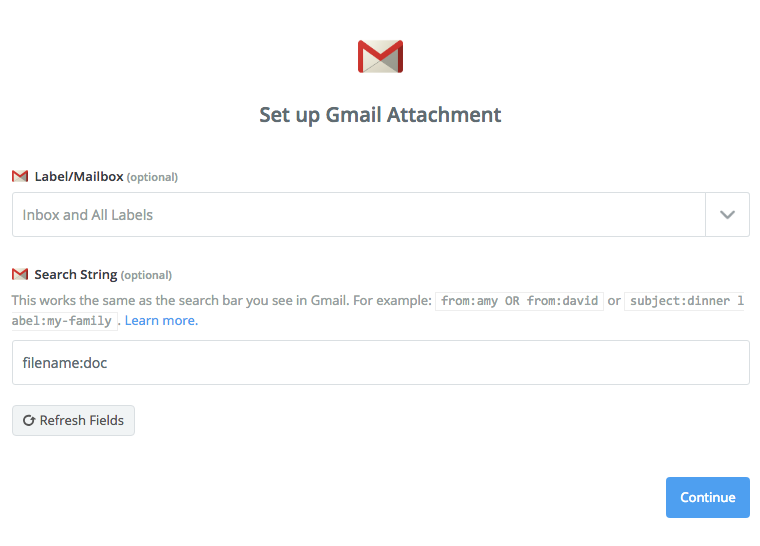 The next step is to choose the action we want the data from this trigger to flow into. Obviously, we want Stardog! 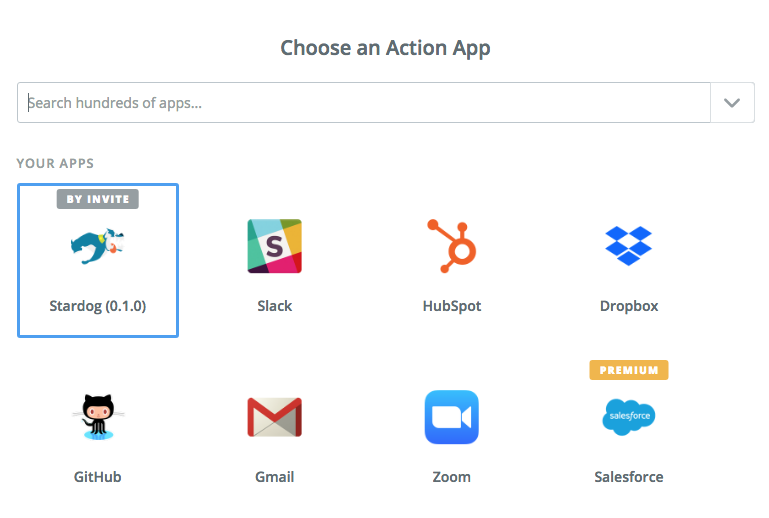 Finally, we need to set up our “Add Document to Database” action by populating the database name from the drop down (Zapier will reach out to the server to get the available databases) as well as the file name, which we choose from Step 1. Our options are then to send in a File object itself or a block of text. Since Gmail happily gives us the file with the Attachment key, we choose that. 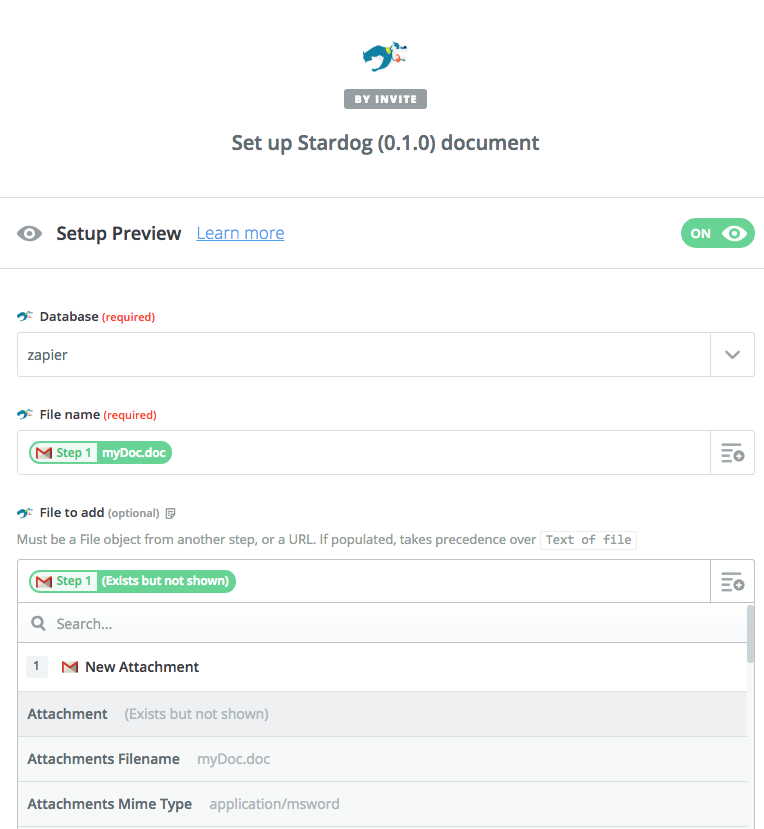 Now we just turn our zap on and wait for it to run. Or, for the impatient, Zapier provides an option to manually run any Zap. Once it runs, we’ll see it in our task history: 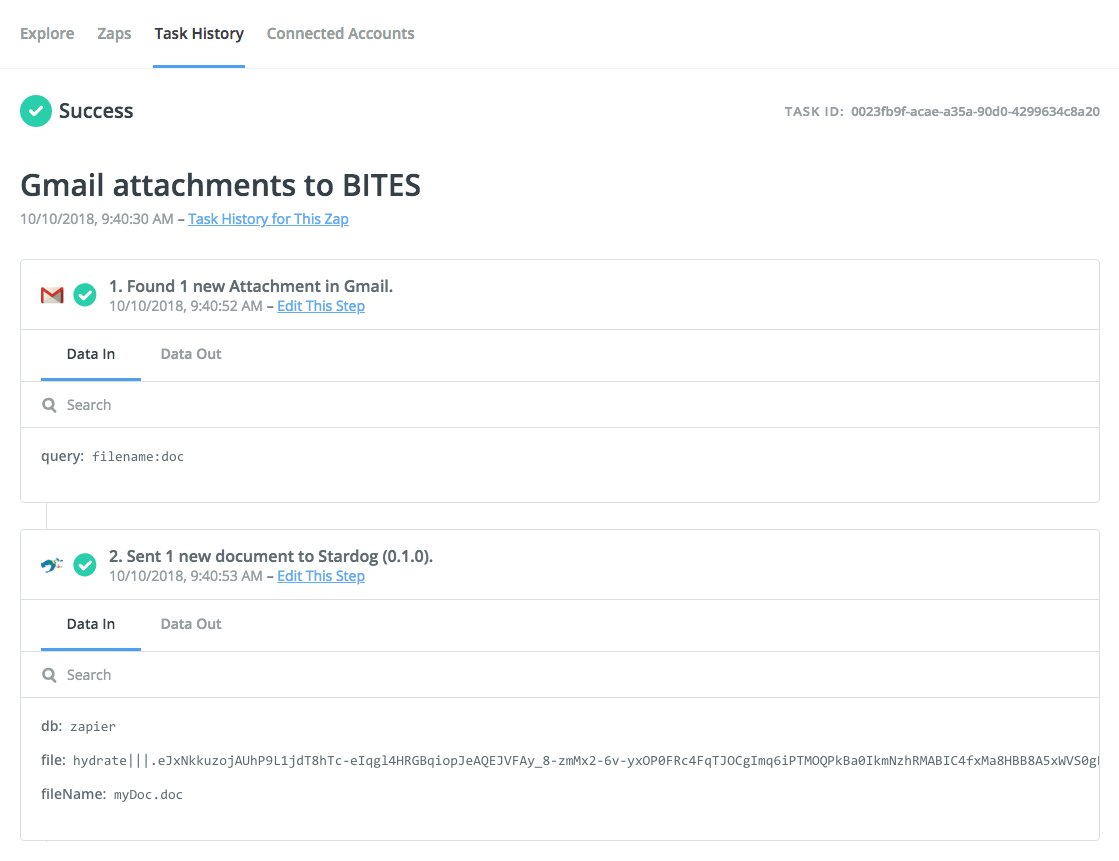 And we’ll also see the attachment in our database’s BITES store. Piece of cake!

Let’s say, for the sake of a contrived example, that I have a spreadsheet in my Google Sheets account that I use to keep track of Stardog databases. It’s nice and simple: 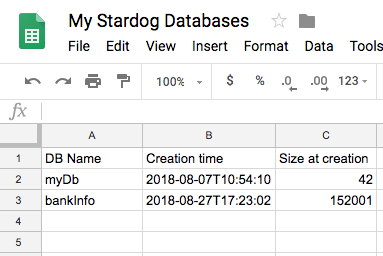 I don’t want to have to keep this updated myself, and why should I when Zapier can do it for me? I’ll create a database to test it out: 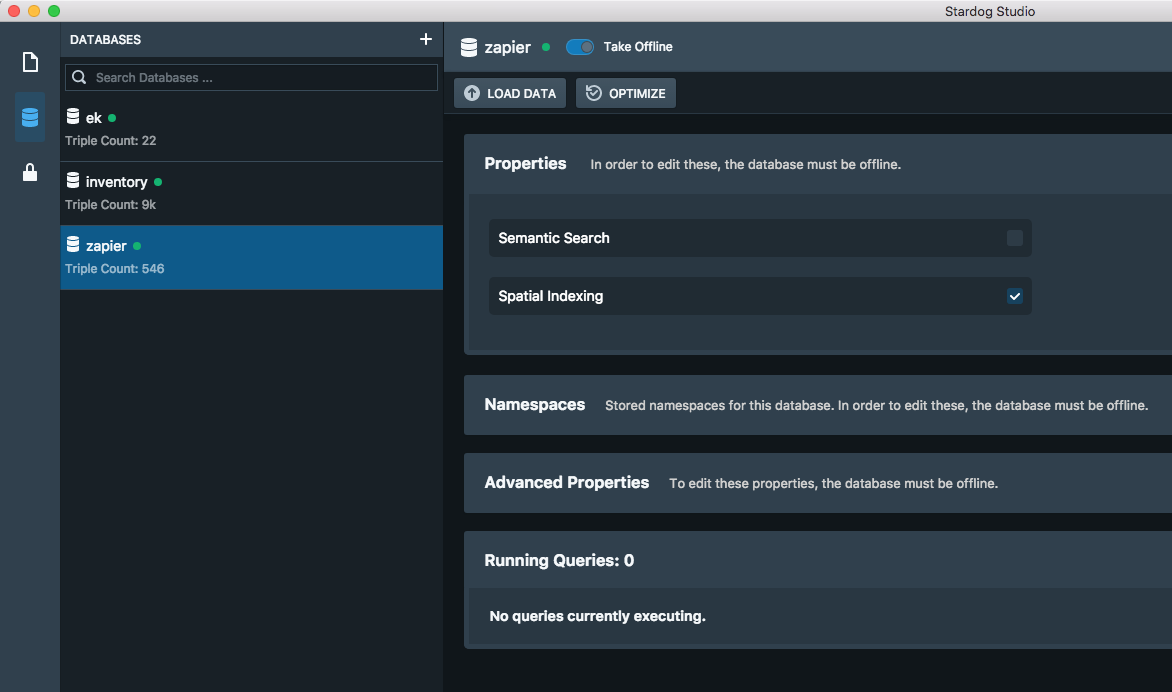 In a new Zap, I set up my Stardog trigger and Google Sheets action (pulling values from the trigger): 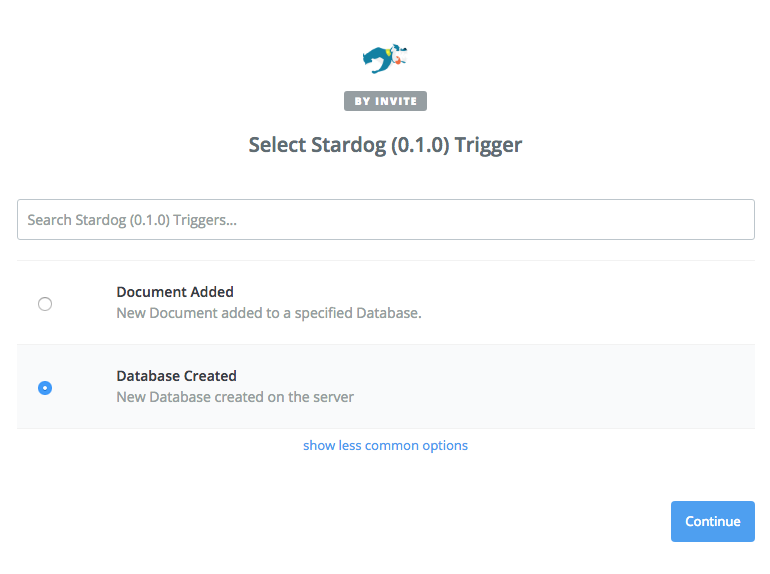 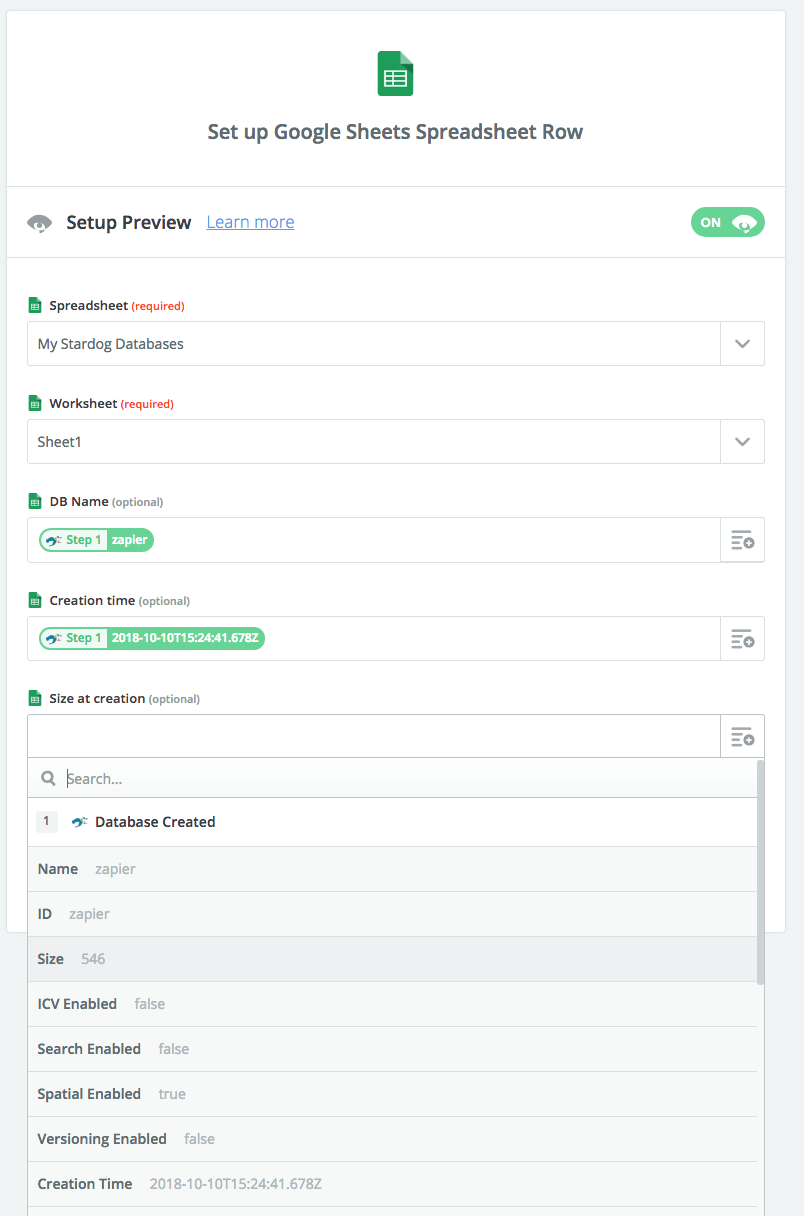 After my zap runs, sure enough, there’s a new row with my new database: 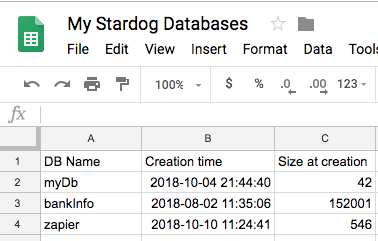 Trigger->Action may be the most common type of Zap, but you can combine multiple actions to do some pretty powerful stuff. For example, what if when we added a document to BITES we also wanted to store it in a Dropbox account, and then put metadata from that Dropbox file back into Stardog? We can absolutely do that.

We just need to add an action after the Dropbox action that massages the metadata into a block of RDF: 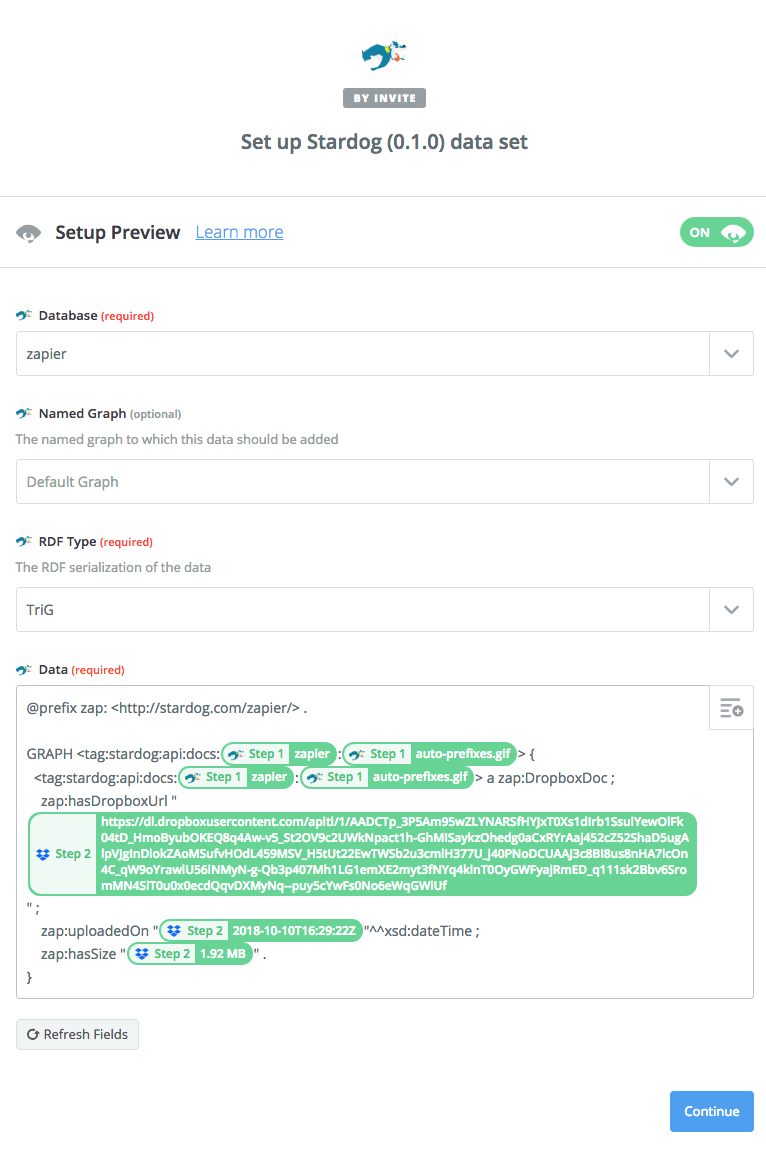 And once it runs, we can see the data in Stardog alongside the metadata Stardog extracted: 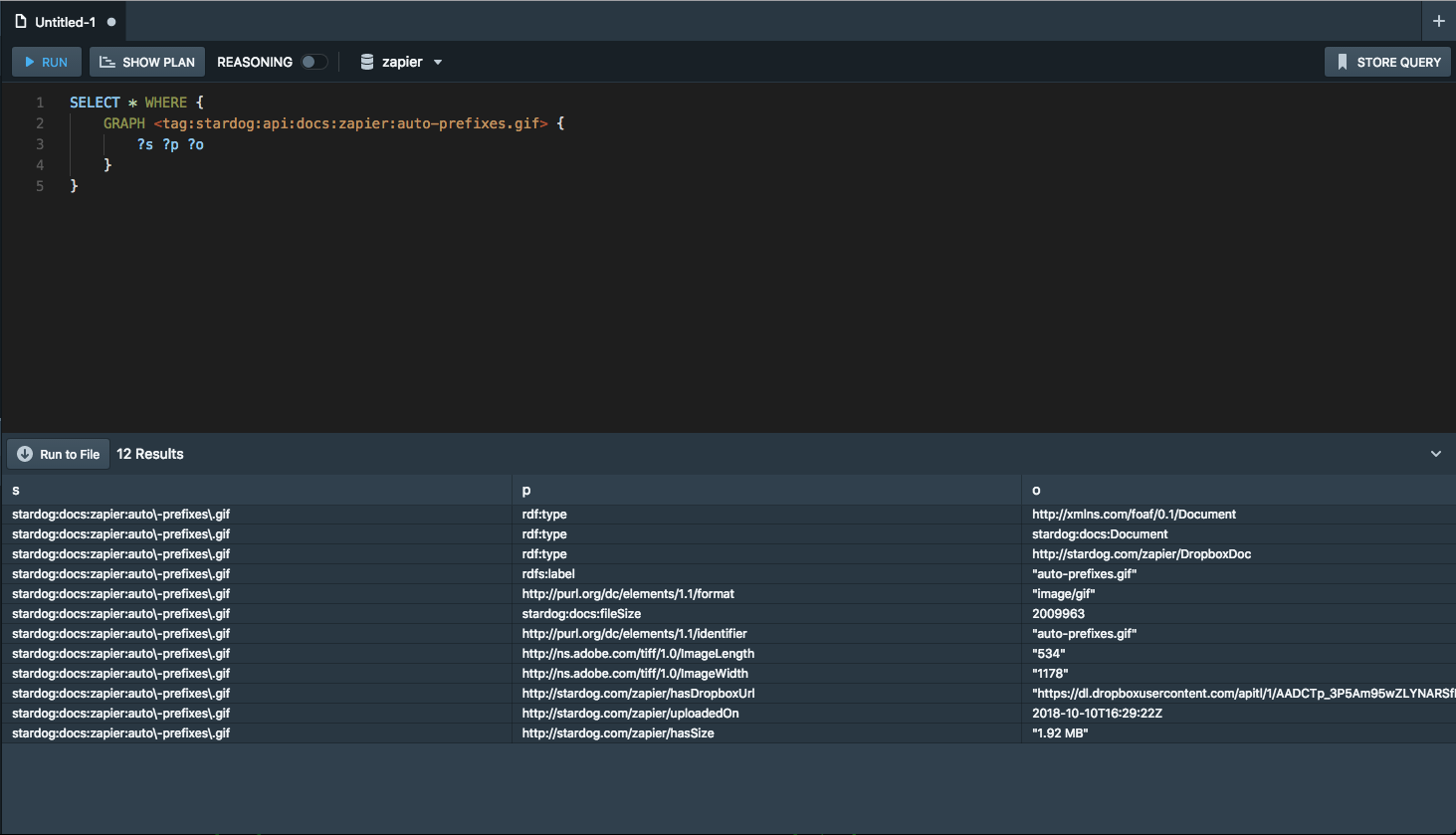 This work represents a minimal suite of what we’d like to implement with Zapier. Going forward we plan to listen to user feedback to implement triggers and actions that people find necessary. We’d also love to write up some transformation tools from <insert data type here> to RDF, so that Zaps like the Dropbox one above are a little easier to pull off without needing to create RDF manually.

Hopefully this post has piqued your interest in Stardog’s integration with Zapier. At the time of this writing, the zapier app has not gone publicly available, however this early-access page will allow your account to access it and play around. Let us know what you think!

JSON silos are a liability, too, so as a first step we’re adding support for virtual graphs over MongoDB.

Working with Stardog should be easy and fun, no matter what your tool chain looks like. So I’m building extensions in Visual Studio Code for Stardog, and I’m kinda lovin’ it.